Established by Land Grant in 1821

The Black Homestead Farm (located two miles west of Carrollton, Greene County, Illinois) was established by a land deed signed by President James Monroe in 1821. It has been owned continuously by the Black family since Margaret Hobson Black, a widow, immigrated to America from Cumberland County, England with her five children.

Greene County, Illinois, named for Revolutionary War hero General Nathaniel Greene, was organized in 1821. At that time, it included lands that are now the counties of Jersey, Macoupin, Morgan and Scott.

Why would immigrants from northern England be drawn to Greene County, Illinois? The following narrative accounts of Greene County landscapes from The Big Rivers Area Assessment, Volume 5, by the Illinois Department of Natural Resources may help to answer that question. 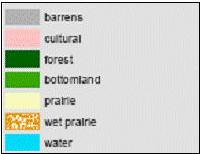 (Describing the Illinois River) "Travelers describe the scenery skirting the Illinois as beautiful beyond description. There is a constant succession of prairies, stretching in many places, from the river farther than the eye can reach and elegant groves of woodland. The trees are represented as peculiarly handsome; having their branches overspread with rich covering of vine. Nevertheless, it is the empire of solitude, for the cheering voice of civilized men is seldom heard on this delightful stream."

"Macoupin, Apple, and Otter creeks discharge into the Illinois 25 to 30 miles above the mouth of the Illinois. Except within a few miles of that river, the lands on all there streams are of an excellent quality and the situation remarkable healthy. The public survey of these lands was completed in 1819. Macoupin is navigable 25 miles form its mouth and by removing flood wood, boats might pass many miles further up. The land within the distance of 10-12 miles of the Illinois is but ordinary second rate and though well watered, it broken and hilly, but eastwardly of this place the face of the country is variegated by gentle swells - the soil of a superior quality, well supplied with rivulets and fine springs of pure water, a good proportion of prairie and wood, and the whole presenting a charming rural scenery. The number and variety of plants growing on the prairie produce blossoms of every hue, in succession. One species of flower expanding its blossoms as another decays, constantly exhibits vegetable nature, through the long summer season. There the senses of sight and smell find their highest gratifications, while the mind of the spectator is vastly amused in beholding thousands of the busy insects." (The root of the Macoupin, an aquatic plant, was used for food. Today it is called American lotus.)

"At this time there were but few animals more abundant than wolves; they were often seen in gangs of four or five an sometimes more. They seldom attacked people - though they did on some occasion."

"It is a narrow channel, connecting a chain of small lakes below the bluffs and near the river. The winter of 1819-1820 proved to be an unusually severe one. The long grass of the prairies had been destroyed by fires lighted by the Indians or hunters, and much of the undergrowth in the woods was killed by the same element. Before the close of winter the provisions gathered by them for their stock from places where it had escaped the ravages of the fire, gave out and they were compelled to cut down trees from the boughs of which the cattle and horses could procure a scanty supply of food."

"A prairie of richest soil stretched out about 4 miles in length and one mile wide extending to the timber growing next to the river. The strip of timber - pecan, hickory, black walnut, oak, persimmon, ash, hackberry, etc. being some three miles in width to the bluffs that were bare of timber with walls of rock in places standing perpendicular form the prairie's edge, one hundred or more feet in height. Wild animals were numerous in the early years and bold to a fault. Many a time in evening's early or later hours the terrifying and wild unearthly scream of the panther and the shrill howling of wolves were heard from the hills and not far away causing terror and shivers of fright."

Daniel Harmon Brush (1820) settled at base of Illinois River bluffs in western Greene County, 8 miles
west of Carrollton and 4 miles east of the river where the prairie adjoined the rocky bluffs

The public square in Carrollton, Illinois is located at the intersection of Routes 67 and 108. From the public square, go west on Route 108 for approximately two miles. At the first rural crossroad, turn left (south). Go approximately 3/4 mile to the Black Homestead Farm, which will be on the left (east) side of the road. 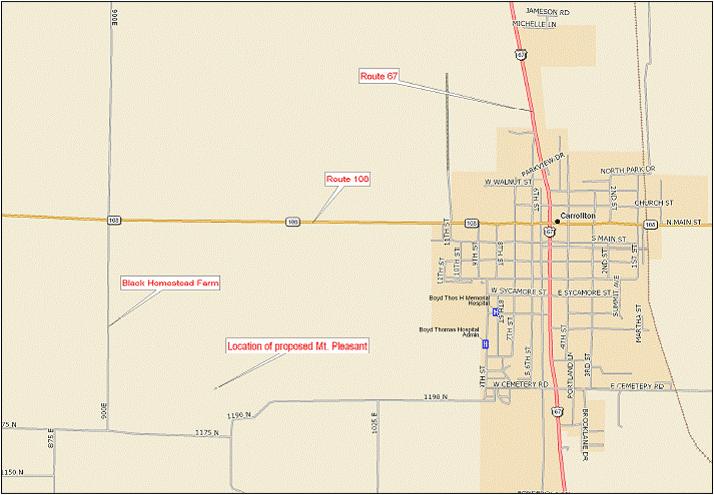 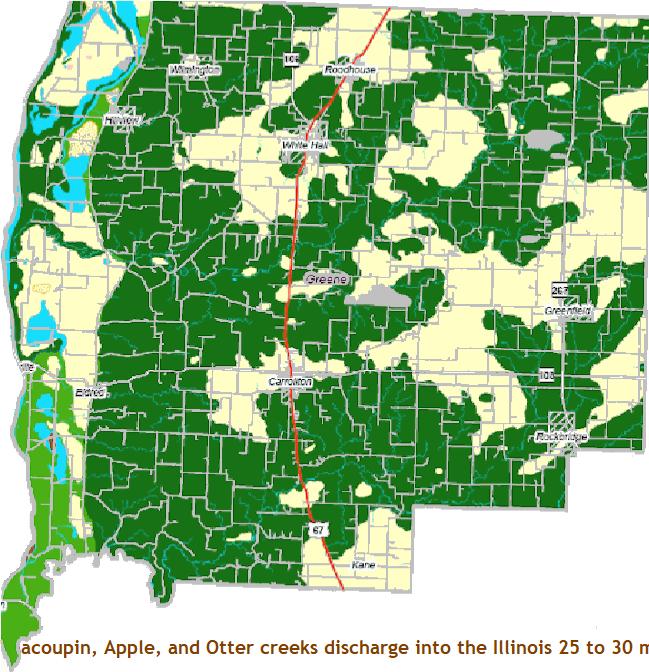 "In Illinois, the surveys began in 1804 and were largely completed by 1843. The surveyors moved across the state laying out a rectangular grid system, known as the Public Land Survey System. They were required to keep field notebooks where they noted details about their survey (such as which kind of tree was "blazed" at the section corners) as well as notes about the quality of the landscape, mines, salt licks, watercourses, springs and other remarkable and permanent things..."